Below is a notice I received from the Delaware Restaurant Association regarding the enforcement of these rules. (Below that is a list of beaches and restrictions regarding dogs in and out of season.)

We have received numerous calls and messages resulting from last week's Facebook Post from the Department of Public Health regarding animals in restaurants. While service animals are allowed in restaurants (not including emotional support animals) there was much confusion over outdoor seating areas. According to the Delaware Food Code animals are not allowed on the property of a foodservice facility (click here to read more from the Food Code, pages 15-16).

This comes as a surprise to many of our members, whose policies may have been to allow dogs in outdoor areas….and many have been doing so for years with no opposition from health inspectors.

We reached out to DPH for clarification.
According to Jamie Mack, Chief of Food Protection, Division of Public Health:

“While the Division of Public Health (DPH) recognizes concerns food establishments and patrons may have about this issue, this is not a recent update to the food code. The Delaware Food Code prohibits pets – with the exception of service animals –  in food establishments, which include outdoor service areas. To date, inspectors have not strictly enforced the outdoor portion of the food code. In an effort to protect the health and safety of dining patrons, we are revisiting the Code and associated policies related to this issue.

Food establishment owners should be aware of the potential health and safety risks of allowing animals in the outdoor areas of their establishments. Animals can transmit pathogens to humans through direct and/or indirect contamination of food and food-contact surfaces. Animals shed hair continuously and may deposit liquid or fecal waste, creating the need for vigilance and more frequent and rigorous cleaning efforts. Additionally, un-socialized animals may present a bite risk to other patrons. 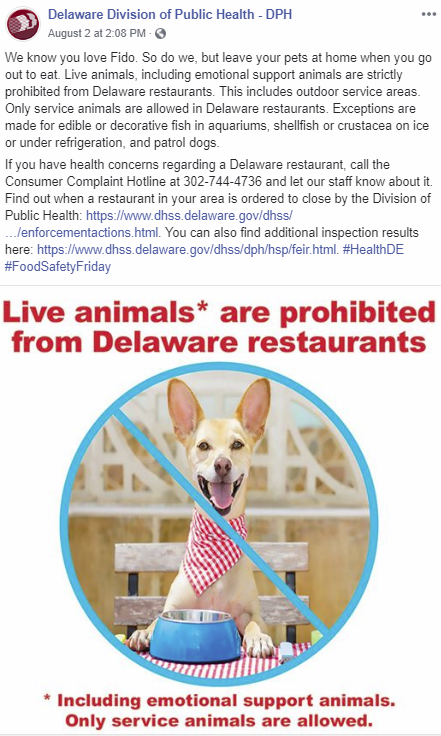 The DRA will keep you abreast of any change or clarification to the rules which may require legislative changes.

OK. Back to business: I get many emails asking me about where dogs are allowed and where they are not, so here goes:

DOGS ON THE BEACH

Rehoboth Beach
Dogs are prohibited on the beach and the boardwalk from May 1 to September 30.

Dewey Beach
Dogs are allowed on the beach year-round by special license. From May 15 to September 15, dogs are only allowed on the beach before 9:30 am and after 5:30 pm. During the off-season, dogs can be off-leash, but must be under your control and be cleaned up after.

Bethany Beach
Dogs are prohibited on the beach and boardwalk from May 15 to September 30. Dogs must be on leash in town.

Lewes
Dogs are prohibited from all beaches between 8 am and 6:30 pm from May 1 to September 30.

Prime Hook
Dogs are allowed on trails and throughout the park. They must be under the owner's control, leashed and properly poop scooped.

Delaware State Parks
Dogs are allowed in the parks. But between May 1 to September 30, they are prohibited from beaches where sunbathing, swimming, sailboarding or surfing take place. Shorebird nesting areas are also off-limits. Details may be found at destateparks.com/rules/pets.asp.

An exhaustive search of the Delaware Food Code as it applies to the physical environs of a commercial restaurant (including my interview with former DE food safety boss Jamie Mack on my radio show – listen to it here), resulted in this:

(B) Live animals may be allowed in the following situations if the contamination of FOOD; clean EQUIPMENT, UTENSILS, and LINENS;
and unwrapped SINGLE-SERVICE and SINGLE-USE ARTICLES can not result:

(3) In areas that are not used for FOOD preparation and that are usually open for customers, such as dining and sales areas, SERVICE ANIMALS that are controlled by the disabled EMPLOYEE or PERSON, if a health or safety HAZARD will not result from the presence or activities of the SERVICE ANIMAL;…

The restaurant and food sanitation inspectors apply the rules as follows (all of the inspectors I spoke to are major dog lovers, by the way). The only exception to the following rules is in the case of properly licensed service dogs for the blind, etc.

With the singular exception of properly licensed service dogs, dogs are prohibited in the actual area where people are dining. However, if a front porch/deck area is fenced in or otherwise separated (which it must be if the restaurant has a liquor license), dogs are allowed on the OUTSIDE of that fence or separation.